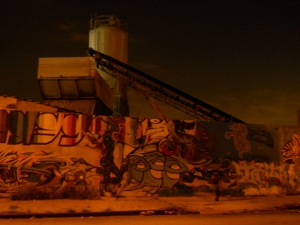 Graffiti. It’s a form of communication as old as cities themselves and coincidentally, there’s no shortage of it in the Big Apple. One of the things I wondered when I started my job was how much of it was still existed this far into the 21st century. Now, all of you hipsters and millennials might be surprised to know that graffiti was once one of the biggest problems in the city, right up there with crumbling housing, Subways that walked instead of ran, and fiscal insolvency. Thankfully, that’s no longer the case.

Flash back to 1981. Ed Koch is running for re-election, the Iranian Hostages return home from 444 days in captivity, and President Reagan comes a stone’s throw away from being assassinated by a Jodie Foster-loving psychopath. In the midst of all of this, 4 1/2 year old Pat attends his first Yankee game which naturally involves a car ride over an extremely clogged George Washington Bridge. I had no idea that I’d be in college before the team I was about to cheer on would play in October or how close to the stratosphere our seats would be nor did I have any idea of what I was about to witness as our car made it’s way through the Bronx to find an open place to park. Most importantly, miniaturization had yet to take place, resulting in film being a scarce commodity. Had I had the digital camera and iPhone that I currently bring with me on every shift in my hands on that fateful day, I would have recorded every aspect of that ride, from the filtered sunlight illuminating the leaded auto exhaust underneath the apartments on the Trans-Manhattan Expressway to the archaic El over Jerome Ave that rumbled as we waited for the light to change. Most importantly, I would have snapped the graffiti provided the most color to be seen on that fateful day.

After all, that shit was everywhere.

Ask anyone who was alive then what it was like and their eyes will probably light up upon recollection of how marred open surfaces were. Concrete, brick, and wood were no match for the onslaught of Krylon and sharpies that descended upon the city. It was enough for the MTA to declare a war on it that didn’t end until the last stainless-steel Subway car was eradicated of the markings in 1989. Burgeoning gangs in the Bronx would hop the fence at the Subway yards at night to leave their colors and names on the side of anything on wheels that was parked, so the whole city would see their names and tags on their way to work the next morning. What rose out of the ashes of the decaying slums was more than an crude artistic movement, but the beginnings of hip-hop itself. It’s nearly impossible today to hear The Message from Grandmaster Flash or Kurtis Blow’s The Breaks and not picture an Adidas-wearing DJ blaring out the sampling beats on a pair of Technic 1200’s as a Graffiti-covered train rumbled by in the background. 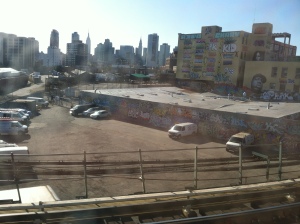 President Carter might have gone down Charlotte Street in the Bronx and vowed to rebuild but the real seeds that sown the destruction of graffiti was what killed off much of the edge of the city, and that was gentrification. Graffiti was, and still is, a form of rebellion set to art. There are no guidelines, no schools for it, and it’s not done in public in broad daylight. Much like vermin that scurry when the lights are turned on, the artists themselves had wished to remain as anonymous as possible, resorting to nicknames like “Plug” and “Shadow” as a moniker. Any validation of this could be seen in the artist that most exemplified the tumultuous decade of the 1980’s:

I loved Haring when I was growing up. So many playgrounds, walls, and published art collections in that decade featured his work but what amazed me the most was how beginning which of course, was on theSsubways. One man, one marker, and one crazy style (when combined) was enough to start a movement that led all the way to the art galleries of SoHo and the face of the AIDS epidemic that was inescapable shortly after bursting on the scene. What seemed like an innocent collection of dancing men and animals contained tons of erotic and societal references when looked at closely but the bigger message was the rebellion that so many artists felt against a society that made them outcasts, which was also shared by Haring. Coming out was not the same as it was in today’s era of DOMA and Ellen Degeneres and as I’ve mentioned before on here, Haring was like Madonna in that he exemplified a time when those from more conservative parts of the country could migrate to Manhattan, crash on someone’s couch, and express artistically the change and issues that America was facing Homophobia and corporate greed might have been topics that many were afraid to speak out about but Haring unwillingly jumped on the bandwagon that came to exemplify New York in the 1980’s.

I’m not saying that he drove a Beamer, moved into a downtown Loft, or spent his zillions on Cocaine but no other artist of his age went from scrawling on blank transit system billboards to having his own gallery exhibitions so fast as Haring. Real artists do their work even when they starve but he hit it big in a short span, like so many others who were upwardly mobile in the 1980’s. Just as fast as he shot to fame, he lost his life when the disease that took out so many in his community cut his life short in 1990. I remember where I was when I heard the news, since it was around the time when Ryan White passed on . Although I never knew anyone who perished from the disease, I still remember what it was like to hear it on the news all the time and to see people that made their mark on society and my youth, so suddenly taken away before they should have exited the stage.

The forces that moved Haring into superstardom and eradicated Graffiti have reached their apex today. Large amounts of capital infusion have cleaned up the Bronx, to the point where chain stores and a $1 billion home for the Yankees have replaced abandoned autos and rubble-strewn lots as symbols that the Borough projects out to passerby. Most of the markings that exist today are found in high-end museums (A Haring retrospective of his early years is currently being featured at the Brooklyn Museum), expensive *Chelsea* galleries, and on rooftops out of cleanup’s way on street level. Like so much of New York’s past, it has been commodified and put up for sale to the highest bidder, to the point that seeing a wall covered in art has become a rare treat in the city where an ad for a Disney production on Broadway is more likely to be spotted. As long as there is angst, there will be those who rebel against the “system” and perceived injustices. With a lingering recession and a Mayoral election next year with no clear-cut front runner, there may be a chance for a new movement of artwork to appear on surfaces around the 5 Boroughs, as the disenfranchised tire of taking over parks and plazas for months on end.

Some of the images that will emerge will cover up the old but like those tags and images of yesteryear, today’s art will be reflecting a City and society that has still failed to accommodate the basic needs of all. 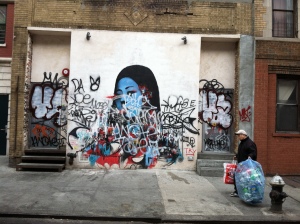