“So why is New York called the Big Apple anyways?”

“Beats me, but I can’t imagine any other nickname appropriate for this place.”

Two and half weeks ago, the 84th Major League Baseball All-Star game was played in Citi Field out in Flushing, Queens. For months, I did what I could to get a ticket to an event that will probably not take place again in New York for at least 20 years. The Mets website was the first place I looked back when there was still snow on the ground, but they wanted anyone who was interested in attending the Midsummer Classic to also buy season tickets for the Amazin’s 2013 campaign. No one in my Taxi was able to hook me up and even though I knew someone who worked the Fanfest at the Javits Center, there was still no word of a $600 or $800 chance to take off for a night and ride the #7 train out that night to see Baseball’s best slug it out. I ended up not working that night but thankfully, was able to come home and watch Mariano shut down the side and earned a well-deserved MVP in his final All-Star appearance.

Once in a while, I get that question posted at the top of this entry tossed at me. As I’ve alluded to many times, my passengers love to ask me question after question after question after…well, you get it. It’s bad enough that it’s usually the same variations of what I’ve already answered that night (Do you own this Taxi? How late are you out here? Anyone ever get it on back here? etc…) but the one up top is one of the few that I haven’t gotten around to looking up the answer to yet. Time and time again, I’ve referred to the city that I work in by its nickname, even though I don’t hear or see it as much as when I was growing up. Like graffiti, down-on-their luck starving artists, the Broadway font, and Milton Glaser’s I Love New York ad campaign being sung in the background, The Big Apple seemed to be depicted a lot more in the waning decades of the 20th Century. Heck, even the ball in Times Square was an apple for a period during the 1980’s, before returning back to it’s more familiar form. Yet throughout all of this, the nickname for New York has stuck.

But why not The Big banana, or even enchilada?

There isn’t one answer but whether it’s because of horses, jazz clubs, or even a brothel, there isn’t a soul that sets foot in the 5 Boroughs today that doesn’t know the link between apples and the City that has adopted them as an official moniker. The bond has become so synonymous that in 1980, the Mets even came up with a way to use the apple for themselves. Milwaukee may have Bernie Brewer taking a slide into a vat of beer and the south side of Chicago had an exploding scoreboard but after every home run hit by a Met, a giant Apple would pop out of a hat on the other side of the outfield wall. It was with that in mind that Major League Baseball decided to celebrate this year’s All-Star game by putting – what else – apples, all over the city. Lots of ’em, with the logos of the 30 Major League clubs and a few other designs tossed in for good measure. Why am I even putting this in here?

Because yours truly tracked all 35 of them down the week before the big game.

5 years ago, something similar was done for the Yankees. The House that Ruth Built up in the Bronx was hosting the All-Star game that year and during (the first) Yankee Stadium’s 86th and final season. As part of the festivities leading up to that 15-inning classic, a bunch of Statues of Liberty were put on parade around the City, as well as on Ellis and Liberty Islands. Being such a rabid baseball fan, I hunted every single one of these down, snapped a picture of it, and posted them all up online before I took off for the Summer to watch a bunch of Minor-League games on the road. I didn’t have a chance to buy any tickets for the game in the Bronx, but I’ll never forget turning on the radio in my Mustang and listening to the latter innings on AM radio in the wee hours of the morning, underneath the stars.

That was not the case this year but thankfully, I was able to visit firsthand all of the apples that were spread out and about. I had seen a few while driving around during my shift and on my off days, I took out the map that was printed in the paper and proceeded to find every one and cross it off, before pounding the pavement and moving onto the next. The hardest part was getting a nice shot of one without any distractions and given that so many were placed in high-traffic areas, that was easier said than done. 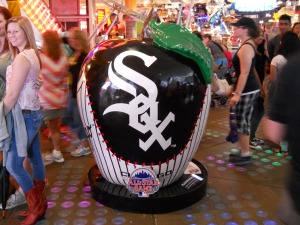 Most people would wonder what would lead someone to do such a crazy thing. Yes, I’m a huge fan of our national pastime and, yes, I probably had better things to do during my off days than to chase a bunch of fiberglass apples around New York during the heat of Summer. For me, it was part scavenger hunt, part checklist, and part walking tour. Some of them were in areas that I hadn’t been on foot in in quite a long time and they allowed me to get reacquainted with parts of the City that I was only familiar with from behind the dash. The All-Star apple was out at Citi Field and since I went out to see it when the Mets were away from town, I found the old Shea base paths in the parking lot and re-enacted the last out of the ’06 NLCS.

A few others were on the far East and West Sides of Manhattan, which are practically no-man’s lands for pedestrians unless they’re on the way to somewhere specific in those parts of town. The Houston Astros Apple was in front of the Helmsley on 42 Street, which is where I dropped off National League All-Star closer Craig Kimbrel the night before the game. Several were down in Lower Manhattan, which sadly did not look much different than when I was down there in ’08 (except for 1 WTC being nearly complete the second time around). A big part of the allure of the whole parade was chasing them down on foot, which is how I learned my way around New York for years before I took the current job that I still hold.

I’m sure some people reading this will wonder why a 36 year-old Cabdriver even cares this much about a kids game played by overpaid drug addicts and egomaniacs and yes, I’ve often wondered the same thing myself. Given that I’ve seen cops ride on sidewalks, a video being filmed in the middle of 8 Ave. during rush hour traffic, and several fights and arrests while waiting at red lights during my last full week on the job, I realize that sports and recreation is one my ways of escaping the madness that so many of us who drive around New York have to put up with on a daily basis. No, they don’t solve problems, win wars, cure diseases, or make a difference in our day-to-day lives but sports are a big business in this country today and are a diversion during a time where so many of us have so much weighing us down. A nation’s lonely eyes once turned to Joltin’ Joe and for me my eyes will turn to many images, texts, people, and yes, activities when the nights grow long and the outlets are few for me to reach out to.

A little over 20 years ago, Time magazine did a cover story on “The Rotting Apple”. I was in 8th grade and read this issues in the Middle School Library when this came out – murders were at 2,000 a year, the Budget looked like it wouldn’t be balanced, people were once again fleeing for greener, suburban pastures, and race riots dotted many inner-city neighborhoods. Newly-elected major David Dinkins had his hands full and it looked like New York’s best days were in the rear-view mirror once again. Thankfully, that did not turn out to be the case but it took a massive infusion of capital, resources, a political shift in the City’s electorate, and a renewed questioning of New York’s role with the rest of America after 9/11 to bring Gotham back to prominence. No, it’s not a perfect place and much work has to be done to make New York the leader in innovation and immigration in the 21st Century but landing two All-Star games and having a unique form of public art on hand this Summer to make the steamy nights a bit easier for me to handle was another visible sign that the place that I call home during my working hours was on the right track and in much better shape than it was a generation ago. 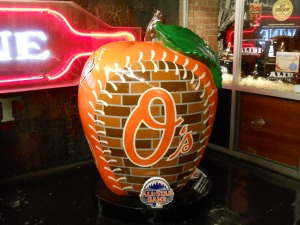 Of course, the apples are gone now. I’ll still have youtube clips such at this “Big Apple Movie” (the bumper is at 1:50) to remind me of why I fell in love with New York in the pre-internet days, when TV was the only way I found out about the great city to the east of me:

It seems like so long ago and maybe when the next All-Star game is held in New York again in the 2030’s or 2040’s, someone will take out all of the apples out of mothballs and introduce them to a new generation of visitors, many of whom will find it hard to believe that the Big Apple was on the brink of insolvency and irrelevancy during the lifetime of some of its inhabitants. 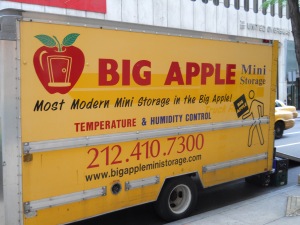