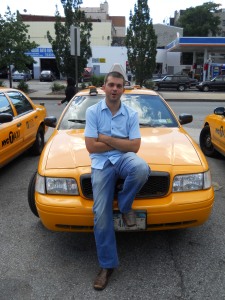 15 minutes after after this shot was taken, I uttered the words that later became the title of this first posting.

Of course, nothing’s been the same since.

I can’t imagine what most of you who are reading this (and know me already) are thinking. I always thought that life had thrown me a ton of twists and turns but once my experience at Columbia ended a year and a half ago, I thought that circumstances would improve. As anybody who has a pulse on this nation can verify, they certainly haven’t.

And that wasn’t the case for me either.

Flash forward ahead a few months after graduation and to the moment when my student loans became due and now I had the clock ticking against me. Payments. Lots of them, every month for as far as the eye could see. Sending a whole tree’s worth of resumes out and searching online job postings led to the same 3 or 4 responses – none of which needs repeating on here. The one positive aspect of my academic journey ending was that I got to spent some time in the Big Apple. Lots of time, I should add. Lots of time doing lots of activities that I had put off during the 3 years and change that I spent camped out in Butler Library until the wee hours of the afternoon. Time that I thought would lead to a payoff down the road.

Sure enough, I ended up down that proverbial road…but it wasn’t paved with good intentions. Just like the time I went, this one was actually paved, albiet with loads of bumps and potholes. Lots of job posting and vehicles going by me all ended up conveying the same simple message that ended up hitting me over the head repeatedly:

For someone who was unemployed and unappreciated, that was music to my ears.

A month and half later, I got the highest score the week I took the TLC exam to get my hack license and of course, the rest was history.

I should know a thing or two about that, since that was my major in college. Before I decided to drive for a living, everyone kept asking me where I wanted to teach. Now that I do this and I tell people what I majored in, they ask me where I plan on teaching.

In some odd way, I *am* teaching people. It’s not in the classroom or on the lecture circuit, but instead, it’s in the 5 Boroughs. For starters, many of them say the same thing to me as soon as they tell me where they’re going:

“You’re the first white/American/English speaking/nice/(fill in the blank) cabdriver I’ve ever had.”

Hell, you may be thinking the same thing too.

And that’s where this page comes in.

I knew I was going to write about this as soon as I signed up to take the course over in Queens. There was going to be too much happening for me *not* to write about it. Right after I get the look of shock from people, they all want to know about the stories. Or the characters I meet. Or the craziest/wildest/most memorable fare that I’ve had. Lord knows there’s been enough of all of them over the last three months.

More importantly, there’s been enough people that I can’t forget.

Over the coming weeks and months, my goal is to take as many of the people, places, and experiences and translate them onto here for you, the reader. I had no idea what to expect when I started this job and based on the number of questions I get in my cab in a given night, I’ve come to the conclusion that this is the case for just about everyone else too. As difficult as this may sound, that pales in comparison to the challenges that I face on a nightly basis – potholes, pedestrians, cops, sanitation trucks, pedicabs, the NYPD, tour buses, Fire Trucks, livery car drivers, ambulances, protestors, bicyclists, and of course, New York’s finest. I always tell my passengers that if I only avoided 99% of those in a given night, I would have lasted about 2 hours.

Thankfully, I’m past the hard part. I hardly have to look at my 5 Borough Atlas now and most streets and bridges are no longer a challenge for me. The trick now is to take everything that I’ve seen and heard and put it down, possibly into a book when this is all said and done. No two days of work are remotely close to being alike and I can honestly say that this is the first time in my life that I don’t mind getting up at 1 in the afternoon to go to work. I forgot to mention that I have yet to work a day shift, so *everything* that you will be reading about on here took place between 5 in the evening and 5 in the morning.

Last but not least, I have to mention those that came before me. Take a look at the links on the right-hand side of this page and you’ll see why the old saying of  “All history is revisionist” applies to something as completely different as this blog. New York Hack is where I got the idea for this, even though this wasn’t my first attempt at putting something up like this online. Long before I ended up driving a yellow cab, I was fascinated by Melissa’s writings regarding her experience. An attempt to contact her went unanswered so if anyone reading this knows how I can get in touch with her, please forward that to me!

The other pages deal with the growth and management of the transportation arteries of the city. Gridlock Sam was invaluable to someone who wanted to keep up with the city but was too young to drive around it by himself and I still read his column and traffic shortcut book daily. Second Ave. Sagas started as a commentary on the never-ending Subway project on the East Side that has blossomed into my go-to source for all transit-related news and construction updates. Nycroads.com picked up where Caro’s The Power Broker left off and gave me all the answers to the where’s and why’s of the arterial system in New York. All of this stuff may sound nerdy to you but once you see the meter whizzing away and a happy passenger in the back seat, all of the reading up becomes worth it tenfold.

If you made it down this far, you’ll have no problem following me around the world’s greatest city. As I’ve stated before, there’s room in the shotgun seat, so grab your dirty water dog, Dunkin’ Donuts, and buckle up.

I hope you enjoy coming along for the ride of your life. 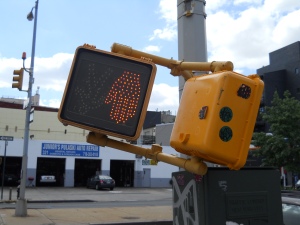