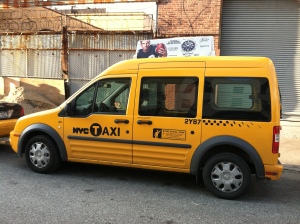 Not to be confused with the Taxi of Tomorrow

“Nice cab you have here!”

“This must be that Taxi of the Future that I keep reading about. It looks so European.”

“I’ve never been to Europe so I can’t vouch for that but you’re incorrect. This is a new Taxi but not the “new” new Taxi – that’s not going to be out for a year and change.”

“So this isn’t the one that one the citywide competition?”

“Nope, that’s a Nissan. This is a Ford Transit Connect.”

“What kind of a name is that and how did a foreign model get the contract for New York?”

“Lady, I’m not from Dearborn and I don’t know the Mayor personally. You can seek them out if you wish to know.”

And so it goes.

I’ve had at least 50 variations of this conversation over the last month, ever since I was given the long, round key to the above model vehicle and asked if I wanted to let ‘er loose on the on the streets of the Big Apple. Now, I don’t have any kids (as far as I know) so driving “the van” was a bit of an odd concept to me at first. Thankfully, it hasn’t been difficult to navigate and it’s nice to be noticed by New Yorkers, instead of just having them dart out in front of me at all hours of the night.

Eventually, the topic that always arose during this exchange was about the new model of Taxi. Was there really a citywide competition? Would it be ADA compliant? Most importantly, would there be a day where *all* the yellow cabs in the citywide fleet would be identical?

A little background first for those of you unfamiliar with the vehicles that transport people from points A to B in the 5 Boroughs. Most of what you currently see on the street are the last of the workhorses known as the Ford Crown Victoria. At one point, it WAS the only model in the city fleet and if you were pulled over by a police officer of rented a car at a major airport, odds are that the vehicle in that fleet was also a Crown Vic, as we refer to them. Popula , durable, and fast, they were a staple across the land for decades and could handle the wear and tear that millions placed on them over the years. Unfortunately, they had one big drawback:

They were lousy on gas.

I drove a Mustang for years, so I’ll admit that I have a bias for the automaker that started out making mobility available for the masses. It had a big engine and wasn’t the best on fuel economy but I didn’t spent a majority of my time on thoroughfares that could double as logging trail pathways. Eventually, the price of gas spiked up and greenies became powerful enough to change the vehicles found in Taxi fleets.

Soon enough, the Toyota Prius, Ford Expedition, and a whole host of other models entered the mix and could be found on the streets of New York. One of the questions that I was often asked when driving the vehicle pictured above is whether it cost more for the passenger since it was “ADA compliant and all that”. No, it was the same as all the other Taxis but when I saw people choose the Crown Victoria over that when we both pulled up to a hailing passenger, I knew there was a problem with how people perceived it. I still laugh at the rich bitch on the Upper West Side two weeks ago who “couldn’t slide the door open” and gave up after one halfhearted attempt to enter my wheels on that night. The point to remember is that Taxis are yellow and have the same rate for one reason:

Of course, that was out the window once competition entered the Taxi marketplace. While I don’t buy and sell medallions like owners do, drivers like me *are* the public face of the industry so when I’m on duty, I see enough to know what works and what doesn’t.

A month or so after the Transit Connect entered the rotation of vehicles dispatched to the nightly drivers at my garage, there was a big hullabaloo about the coming attraction at this year’s New York Auto Show. No, it wasn’t an electric car or a roadster from a famous movie. Of course, it was this…

Soon coming to a street near you

Ladies and gentleman, this is it – your Taxi of Tomorrow. It was tucked way into the corner of the exhibition space and was only found by me since as usual, yellow wasn’t a popular choice of exterior colors on next year’s models. You’ll also notice the glass around the edges, so I wasn’t able to sit inside of ‘er and see how well it felt for the person who might actually have to drive it.

Once the initial amazement wore off, it was time to give this model a good inspection. Press releases for the vehicle touted its accessibility, large sunroof-like window for sightseeing landmarks around the city, and recycled tires used in the floor mats. As a sign of the times, it has USB ports for charging electrical devices too and a built-in GPS and meter which does show some input from the driver’s perspective. A few shots of the promo video that accompanied the vehicle featured it in locales such as Times Square, seamlessly fitting in with the traffic and neighborhoods that it will inevitably have to pick up and discharge passengers in. While models and renderings are always pleasing, the Taxi will be just like me when it finally comes down to hard labor and brass tacks since real test will come once the key is turned and the grind of 12-hour shifts takes its toll.

Nearly every model of cab has its drawbacks from what I’ve experienced firsthand. The Crown Vic is a fuel hog and has a turning radius the size of a 747. The Prius? I’ve seen a few at JFK take two pieces of luggage before the passengers took them out and found a cab that was up for the task of transporting international arrivals home without feeling like a sardine can. The SUVs? Guess what – they’re small on room too, once they carry 4 people. Hybrids are great too but God forbid you’re deaf or blind – you’ll be next to one and have no idea that it’s actually moving until you find it or it finds you. Oh, and that Transit Connect pictured way at the top? The one I drove two Saturdays ago had to go in for brake service halfway through my shift, and it had an astounding 14,000 miles on it.

The city is taking a *huge* risk by standardizing the Taxi model with an unproven design that might not be ready for the wear and tear of the streets of New York. Yes, a standard model is the best way to go but to make it fuel efficient, modern, stylish, made in the U.S.A. (I was informed that Nissan’s plant in Smyrna, Tennessee will be manufacturing all the NV 200’s for the Big Apple), and durable would not be an easy task for anyone. To do all of that and make it ADA-compliant would inevitably result in something like this: 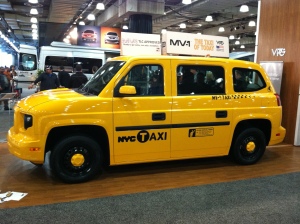 Thank God I don’t have to explain this to my passengers…yet.