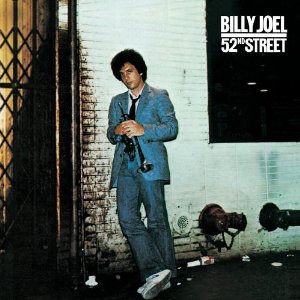 A record from another time

Once upon a time, I had two parents. Both living, both married to each other, and both raising me. I can’t recall a whole lot from those days but they had steady jobs, a good disposition, and taste in music. Lots of it. Even though I went to bed early at night and never went out much of anywhere with them, I was lucky enough to listen in on what was spinning at 33 1/3 rpm Not too long after I graduated from a diet of 70 jars of baby food a week, I moved on to such staples as Frank Sinatra’s Greatest Hits, Endless Summer by the Beach Boys, The Village People’s Macho Men, and of course, The Piano Man’s classic, 52nd Street.

Granted, these weren’t 8-tracks blaring out hard rock or disco but rather, these were on vinyl and the largesse came not in the component that held the music, but in that which played it. We had the most beautiful wood-paneled stereo system that the 70’s could crank out and every time it came on, it let you know that nothing else in the room mattered. I could never see the record spinning away in a halcyon state since I was short but I’ll never forget the album covers or the light that shone against the dots on the side of the revolving turntable. No, I never made it to Studio 54 in it’s heyday but I was lucky enough to have the next best thing at home, along with the most ideal family living situation in my 30something years that I’ve been alive.

Flash forward to the holidays in 2011, long after giant stereo systems were replaced with mp3’s and life turned into an existence between an unstable living and ad-hoc employment situation. Much as records needed to be played faster when shrunken down, so was the case with my day-to-day existence. As the city became smaller and more familiar to me, so the days and pace quickened, to the point where 40+ fares in a 12-hour shift could be pulled out of my back pocket. I had a whole string of these in December until a seemingly innocuous fare turn the most unexpected of turns.

It began, like so much else at the end of the year, in Times Square. A waitress heading home after work slammed the door of the cab in front of me and walked toward my Taxi. This meant that I was going to be making a run to an outer Borough, which I had yet to refuse in nearly 5 months on the job.

“How ya doing? I saw that Taxi reject you up at the light.”

“Such an a-hole! I’m going home to the Bronx. Right off the Deegan and you can take the Madison Ave. Bridge to get up that way.”

“Sure thing. There shouldn’t be much of any traffic since it’s late and all the work is over on the Wills Ave. Bridge. How’d your night go?”

“Pretty good. Work was busy and the tourists were good to me. How about you?”

“Just the usual holiday rush. Lots of Europeans in my cab tonight, especially Italians. Must be a good exchange rate right now.”

So off we went, crosstown until we got to Madison Ave. where I made the left to start the long journey up to the Bridge. Hardly a soul could be seen until another Taxi pulled up next to me. We rode in near tandem for a few blocks and at 52 Street, we were even at the red light. When it turned green, we were just about to go through when a cab crossed the intersection through the red light, hauntingly.

Still nothing. I was quite scared as both the cab next to me and I laid on our horns, to no avail. The Prius that ran the light did so quietly and ominously and both of us went through the light after him.

And then a scream…

I threw my car into park and ran out, and so did two other drivers. All of us rounded the corner and halfway down 52 Street towards Park Ave when we saw the cab up against the curb, with the driver unconscious and hunched over the steering wheel, and the fire hydrant that he crashed against knocked over and on the sidewalk.

“Holy shit, just as I thought.”

“Let me see if I can flag a cop down. I still can’t believe he went through the light like that.”

I ran back to tell my passenger what happened and looked for an officer heading uptown, but to no avail. 30 seconds later, I called 911 as a secondary precaution.

“Yeah, I’m on Madison and 52. Someone in a cab went through a red light and he’s out now.”

“I don’t think so. Looks like he had a heart attack or stroke. We can’t get in the car either.”

“No, 52nd. 5-2. He’s on East 52 between Madison and Park now, up against the curb. I don’t think there were any passengers in the vehicle at the time.”

After giving my name, profession, and number, I hung up and ran back to the car. By now, the Police were there and because the doors were locked, the nightstick came out. I could hear the whaps as I ran back to my Taxi.

“I’m sorry for the delay, but I had make sure help was coming. You don’t have to leave since I’ll take you home now and I’m going to turn the meter off early for the time which we sat here.”

“Thank you so much. You did the right thing in calling for help.”

“I had no choice, we’re not allowed to touch others so I had to stay hands off.”

“I can’t believe out of all the intersections in the city at this hour, he rolled right in front of us. That would have been awful if it happened during the day.”

“I know! At least the help arrived.”

Neither of us spoke as we made our way uptown, over the Harlem River, and eventually onto West Kingsbridge Road. I was white as a ghost the entire right, thinking I had watched someone die in front of me for the first time in my life. As soon as I dropped her off, I flew back down the FDR and made my way back over to the accident scene, parking on Madison Ave. By that time, the car was being loaded onto a flatbed to be towed away, with the street blocked off with yellow Police tape.

“Officer, I was here 45 minutes ago when this happened and I saw the driver out over the steering wheel. Is he alright?”

“Yeah, he had a massive heart attack but the paramedics revived him. He’s in the Hospital now and should recover.”

“Oh my God, that’s great to hear. Thanks for the information.”

I don’t recall much else from the rest of the night, except for the usual assortment of financial workers, bartenders, and nightcrawlers making their way into my cab for the ride home. I didn’t have to go up Madison Ave until my next shift, but it was never quite the same when I crossed the intersection that the wayward cab crawled through that fateful night. I took the medallion number down and passed it on to the guys at the garage, but they weren’t aware of who the owner or leasing agent was. Inquiries into various print and online news agencies turned up nothing either, but that certainly would not have been the case had the driver passed on.

Years from now, the memories will pass on. Much like the 21 Club or Toots Shor’s, the scene will only stand out for those who were there to witness it for themselves. The location will still exist for any witness who wishes to walk through and think about what took place there, but the pace of life will become so quick that it will be hard to do so; while stepping away from a world that will be incrementally faster than today’s. I don’t know if the Prius, the mp3, the Christmas of 2011, or even the notion of hauling passengers around in yellow vehicles will be outdated in 20 or 30 years, but I do know that some things in life stick with you no matter the pace or scale of change.

Especially the one that took place on 52 Street. 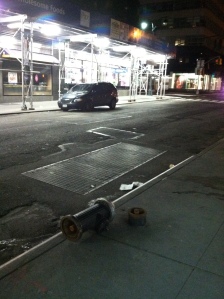 The hydrant, a week later