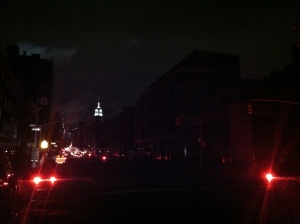 Still no sign of the Halloween Parade – West Village

“Alrighty. I know the power’s out south of 34 St. Do ya mind if I take the FDR down? The less intersections I have to go through, the better.”

“Do what you have to do and get us as close to home as you can.”

And so it went. The end of the above conversation was repeated quite a few times last week as many New Yorkers were forced to go home at night, even if they didn’t have much of anything there waiting for them.

Much was written about the Hurricane that the Big Apple bore the onslaught of last week and much more will be penned in the coming weeks and months as the city continues to clean up and get back onto its feet again. There was no doubt that this storm was powerful – enough so to force the cancellation of the Village Halloween Parade, the Marathon, a week of school, early voting for tomorrow’s election, and countless end-of-season festivals, street fairs, and neighborhood events. The common thread that I read about, and to a lesser extent heard in my cab, was how similar this was to 9/11, when it came to shock, awe, and devastation inflicted on New Yorkers. Upon a closer look though, that really wasn’t the case.

I was not in the city on 9/11 but was planning on going in that Tuesday since I turned 25 the day before. I went out to watch the Giants open up Monday Night Football the night of my birthday and anyone who was in the city that day can recall how beautiful and clear the sky was when the planes hit. What most people don’t remember is how it poured that Monday before, and I mean poured as in not letting up for hours on end. It was because of that that my usual trek through the city alone on my birthday had to be postponed for a day, and then for a week.

When the Towers fell, most people thought that we had reached a turning point in American History. Our economic might had already peaked, the economy would dip into a serious recession, Lower Manhattan would never recover, tons of buildings would either fall of have to be torn down in later months, and thousands upon thousands would become the first casualties of what would be dubbed the “War on Terror”. Thankfully, most of those assessments did not come to fruition as most of Lower Manhattan was cleaned up and on the road to recovery by the time the last steel beam was removed from Ground Zero 6 months later. The nation moved on, only the Deustche Bank building had to be razed, and the Battle of Antietam remained the bloodiest day in American History. History proved to be the ultimate judge of what happened on 9/11, even if the toll was still grim in the end.

Sandy turned out to be a completely different beast, as the cancelling of the Marathon proved to New Yorkers. For all of his good intentions, Mayor Bloomberg was wrong to want to go forward with a race less than a week after the city came to a halt. 9/11 was nearly two months before the race and there were only 16 acres directly affected by the planes that struck Manhattan. The last storm was powerful enough to remind New Yorkers of the giant land mass at the western end of the Verrazano Bridge and the beaches on the far side of JFK. For them, life will never be the same and it will bring into question the uneasy relationship between the far-flung reaches of New York and the economic center of the city that receives the lion’s share of money and attention.

This week’s cover of New York served as a hauntingly beautiful reminder of how much of Manhattan was plunged into darkness due to the storm and the clear demarcation line that resulted from the power outage. I had to cross it several times during my shifts on Tuesday and Wednesday nights and it was extremely difficult to imagine that it was not the first time that the lights had gone out there on such a massive scale. Anyone who could recall the blackouts of ’65, ’77, and ’03 will vouch that they were notable in city’s history for different reasons. The causes, and reaction by those stuck in the dark led to changes in infrastructure and policing in the affected areas. Once again, those will be the issues that the next Mayor of New York will have to address when the cleanup is done.

The truth is that the Big Apple is only as good as the conditions of the utility and transportation networks in it. Many historians have cited the Blizzard of 1888 as the catalyst that led to the burying of the electrical system and the creation of what later became the IRT, the city’s first underground rapid-transit system. With a fare hike looming in March, the relationship of the transit system to the patrons who use it will be under increased scrutiny over the winter as the final numbers are worked out. New Yorkers hate having to dig deeper to get on a bus or train for what they feel is a lack of return for the extra money being shelled out. What many of them don’t realize is that the system is so expansive and antiquated that any lack of a fare hike will only hurt in the long run. Having to maintain and expand the mass-transit network will be important in the future as the price of oil will remain high and the policy of developing the waterfront and using ferries to haul passengers between the glistening new towers will have to be looked as closer. Sandy reminded us that New York is quite an expansive locale and all areas will have to be kept in the fray for the city to remain competitive and desirable for those looking to live there. Having the Rockaways cut off from the mainland will not just affect those who live there, but will serve as a black eye on the administration as a whole, showing the world that it cannot afford to provide basic necessities for those on the periphery.

In the coming months, the Macy’s parade will weave its way through the West Side, the tree at Rockefeller Center will be lit, and the ball will drop on New Year’s in Times Square. The people watching these events on TV will undoubtedly be touched by the heartwarming resolve of the people of New York but what they won’t see are the Sandy’s of the future that threaten the Big Apple. Fault lines under upper Manhattan could awaken at any time, rising sea levels would permanently wipe out much of Zone A, and any number of terrorist plots could expose fragile grids and people’s nerves that are still in the process of healing. The real resolve of New Yorkers will not come in getting the next holiday celebration off without a hitch, but whether they have the patience and fortitude to address long term environmental, infrastructural, and sustainability issues before the City gets to the point of no return.