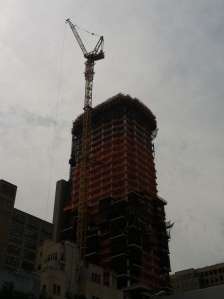 “I mean, look at Madonna. She moves here from Michigan in 1983 with nothing. Sleeping on couches in Alphabet City when it wasn’t such a great part of town. Playing clubs every night. Demo tapes. And then a few years later, boom! She hits it big. It’s a great story but something like that wouldn’t be possible these days.”

“So what do you think of Taylor Swift? Does she have a long career ahead of her?”

“Oh, I think so. She has star power and just like Madonna, she’s smart too. Knows how to change her look every so often to keep it fresh. Gonna be around a long time.”

“I had a feeling you’d say something like that.”

But not just one of any sorts.

Right before Halloween, the city announced that none other than number 13 herself (sorry A-Rod) would be the face of the new tourism campaign in the Big Apple. As if we hadn’t seen her enough, there was going to be a lot more sightings of the pop princess around town now that she was chosen as a “global welcome ambassador”. Timing with the release of her album “1989”, the track “Welcome to New York” doubled as the theme for those trekking to one of the most popular tourist destinations in the world. Swift launched the campaign with an appearance on the 102nd floor of the building where Fay Wray was help captive by King Kong over 80 years ago but this time around, the siren had the upper hand on the people down below. Any proof of that was quickly verified when I took my yellow abode out for a shift and heard (the first of many, many playings of) “Welcome to New York”…

“The lights are so bright
But they never blind me, me
Welcome to New York
It’s been waiting for you”

Billy Joel, this was not.

It was estimated that nearly 56 million people from all corners of America and the globe came to New York last year. With employment in the “alpha” industries (Law, Finance, etc) having yet to return to their pre-2008 levels, job growth in the city has increasingly been led by technology, media, information, and fields that cater to those visiting. Broadway theaters, hotels, restaurants, and transportation would all fall under those and since I happen to work in the latter, it’s a blessing that I’m able to stay busy because of visitors who still wish to use a Taxi as their preferred mode of transportation around town. The city was doing just fine after the post-9/11 recovery and I highly doubt that choosing a mediocre songwriter with a $20 million dollar pad in one of the richest ZIP codes in America is going to sway someone in Middle America or two continents away to come here for a vacation but if that’s what NYC and Company is aiming for, then so be it.

What bothers me more is that Swift is certainly *not* the typical emigrant who leaves home to seek a better and more glamorous life in the big city. Her stardom was already established long before her move and like the cast of Girls on HBO, Swift came from an affluent family that could support her artistic endeavors before her career took off. Most people I know who made the move to Gotham had massive student loans to pay off and were crammed with 3 or 4 other people in a shoebox 10 stories up before settling out on their own some years later. Only artistic types such as David Byrne, Susan Sarandon, and Diane Von Furstenburg who have reached the apex of their respective fields or were in a state of semi-retirement could afford to live in Manhattan and TriBeCa was not the first neighborhood they moved into when establishing themselves in their lines of work. Past spokespeople for the city’s tourism bureau, such as Robert De Niro and Whoopi Goldberg worked for years in New York before being selected and were seen as those who were a part of the city’s social fabric. Swift lived in Pennsylvania for most of her life until touring nearly full-time and was seen by many as the epitome of the rural or suburban type who moved to New York because the city had become so sanitized and full of the chain stores and restaurants that could be found back at home. Adding insult to injury is that in Swift’s case, her downtown pad is not her only residence, which is the case of so many who are buying expensive places in New York as both a vacation spot and a place to park their income as a form of investment. Swift is like many of the towers and condos that are increasingly housing these types – whitewashed, banal, unmemorable, disposable, and lacking in local vernacular but regardless of this sterility, the paparazzi knows when she’s there and ready to head out for her next photo op as her image and celebrity is ultimately what matters in the end.

In my case, the Big Apple’s been waiting for me ever since I was a tot in overalls falling over laughing at Crazy Eddie commercials and wondering why Mayor Koch was imploring New York to clean up New York. As I’ve said time and time again, it’s not the same city now as it was then and the fact that a record number of people are flocking here to spend their hard-earned disposable income is a good thing, even if the pitfalls of a whitewashed city become more numerous by the year. Whether I ever call the Big Apple home or take part of it with me when I finally embark on the next stage of my life remains to be seen as changes to my industry and increased financial pressures conspire to make me work that much harder to keep my head above water. In the midst of the squeeze will be even more sightings of Taylor – on numerous magazine covers, Good Morning America, street advertisements, radio spots, stories of her accounts being hacked, retweets and favorites on Twitter, and of course, in the back of my cab every time I start the meter up with my latest fare.

I only wish that the musical drivel that inevitably gnaws at me came from someone who shed their blood, sweat, and tears in New York and helped build the city that they’re selling to those seeking to experience New York for themselves… 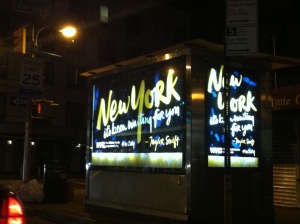 It’s Been Waiting For You – Chinatown