Alright, I get it. You can’t because you’re busy in the heart of Midtown and you still need to be cleaned before thousands will flock to you come daybreak.  Fair enough.

It came to my attention last week that you were showing off, right in the middle of the city for everyone to see. I don’t know if it was for Easter or Passover or because the warm weather finally made a return to our neck of the woods and I also know that it wasn’t the first time I caught you doing this either. After having you distract enough of my passengers and even myself as I made way up up 6 Ave. several times during the night, I felt that it was finally time to have a little heart-to-heart talk with you.

I love you. Really, I do. It goes way back to when you were one the few remnants of old New York that I could behold in pristine shape when much of your surrounds were in battered, ragged, and tagged shape. I got goosebumps the first time you came into view as I rounded the bend on Route 3 and could see you and your spire off in the distance, beckoning me as if I dropped in from a Kansas Tornado and had to make my way over to Oz off in the distance. Although you weren’t the most prominent landmark in the city since the early 70’s, there wasn’t anything that could compare to you. Not the lady in the harbor, nor your nirosta-topped cousin on the corner of Lexington and 42 St could match your soaring verticality, ornate lobby, or grasp that you held onto the collective psyche of this country. It came as no surprise that in classics such as Fail Safe and Independence Day, that it was you that the filmmakers ultimately chose to destroy when it came time to give the Big Apple its death blow. Although the accounts were fictitious, I still cannot bear to look at those scenes on film, and this was long before the real thing came to pass on 9/11.

Unfortunately, I *did* have to look at you putting on one of your luminous extravaganzas recently, and it wasn’t by choice. Let’s face it, even in 2014, you’re still out there by yourself. Nothing over 50 stories stands close to you and it will be quite some time before you’re unseated as the King of Midtown. A pile of “pencils” that will house the world’s super-rich is still taking form up on 57 Street and the supertall glassy spire that’s going to open in Lower Manhattan later this year still does not have the charm, bravado, and zeitgeist that you do, even though it’s been growing on me more now that it’s been topped off and the scaffolding is finally starting to come down the side of it. Your isolation and prominence makes you easy to see (as well as an easy target), which was proven when a few of my passengers looked at you too and asked me what was going on, as if I didn’t have enough to deal with now that the jaywalkers and tour buses are back out in full force.

Never mind that, though. I know that this will probably go in one ear and out the…um, make that window. Yeah, in one window and out the other. I’ll say it anyway for the record.

You’re a better than this.

A *lot* better than this.

All those hypodermic skyscrapers in Times Square put on a light show nightly and even the old New York Central Building on Park Ave. has gotten in on the act, showcasing the latest in LED and timing technology in some hyperactive bid to outdo each other to be the baddest, hippest, and coolest presence on the skyline at night. You don’t need that though.

Or when a plane accidentally hit you in 1945?

Or when a steel column was hoisted up 100 stories in Lower Manhattan in 1972, taking away the title that you graciously and confidently held for 40 years?

No, and you don’t need it now either.

I anticipated watching your lights come on as dusk settled into night, but that was when you had one scheme that stayed on until you shut down for the evening at 2. On the dot, I could watch it happen as I crossed a bridge or caught you in between the gaps of the other towers, knowing that you were calling it a night and that in 3 hours, I would be doing the same. Now, I look forward to that moment so I don’t have to plant a face palm when I’m sitting at a red light, wondering what visual cacophony I will be subjected to as you luminously scream for my attention.

And you know what? It shouldn’t be like this.

All those tacky souvenir shops in Midtown have lots of kitsch in them but besides the lady holding the torch in the harbor, it’s you that they feature the most. Anything else that they display from your era has only aged gracefully – take a look at the towers involved in the race to the sky in the early 20th Century. They’ve been cleaned, modernized, and in some cases, converted to apartments but they’re still grand dames and they don’t have to resort to the lower common denominator to grab everyone’s attention.

Know what’s guilty of that, however? All those towers popping up in those Asian Tiger cities, as they attempt to assert themselves without having any of the romance or bravado that made Manhattan the place to be during the peak of American hegemony. Every year, there’s another glass monolith that takes away the title away from its predecessor and I read recently that a building in Saudi Arabia is going to stretch a kilometer into the sky. Do I care? No. Why should I? Skyscrapers, like everything else in life, are what they are because of the stories behind them. I may not like what’s rising at Ground Zero but should I ever lose it and decide to have kids of my own someday, I will cherish the opportunity to tell them about what used to be there, their untimely demise, and our resolve to rebuild and make the site a better place for future generations.

That’s what New York is all about, and so are you. Admit it – you’re the face of this town as much as Gabe Pressman, the rush of air from a subway grate, the lower East River Bridges, a giant sandwich from Katz’s, and yes, even the vehicle that I drive. You’ll never be the champ again when it comes to touching the clouds but you’re still the King of Gotham, no matter how much you’ll get bumped down the list in the coming generations. Yes, I understand that it’s the 21st Century and that the old way of manually changing the lights on you is gone for good but that doesn’t mean that you have to be a show-off on major holidays or on New Year’s; which was a spectacle unto itself and beyond words.

No matter, though. I still love you and always will, even if no one sees the goosebumps I get every time I approach the city every day for work. 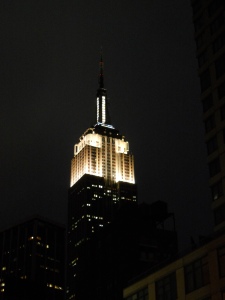