Over the last three years, much had changed in New York’s taxi industry – most of it, not for the better. The Nissan NV200 (Taxi of tomorrow) became the dominant model of cab, Mayor De Blasio’s vision zero initiative continued to rework the city streets in favor of slower speeds and reconfigured intersections, and even the license changed to a universal one that applied to all yellow, green, and black car drivers. Without a doubt, the biggest difference in recent years was the onslaught of TNC’s (Transportation Network Companies) that flooded the city with thousands of extra vehicles. The end result was nothing short of a 21st century tragedy of the commons, as traffic speeds slowed, driver take-home pay plummeted, and morale hitting a low not seen in generations. All of this came to the head in recent months as 4 drivers in various sectors of the industry committed suicide, citing an inability to compete with the extra cars on the road and earn a living.

The one death that hit everyone the hardest was Douglas Schifter’s. Early in the morning on February 5th, he pulled up his car to the east side of City Hall Park, took out a shotgun, put it up to himself, and pulled the trigger. The suicide note left behind blamed the current and previous mayors as well as the current Governor for allowing too many autos to flood the streets, as well as the TLC for the heavy fines imposed via tickets. Those sediments, and the rest of those that he penned shortly before his demise, echoed the ones that he wrote for a black car publication that had long sounded the alarm of what drivers were forced to endure in recent years. Of course, they had gone unheeded but there was a sense that what happened on that gray, winter morning was a turning point in the long-running saga of New York’s for-hire transportation industry. 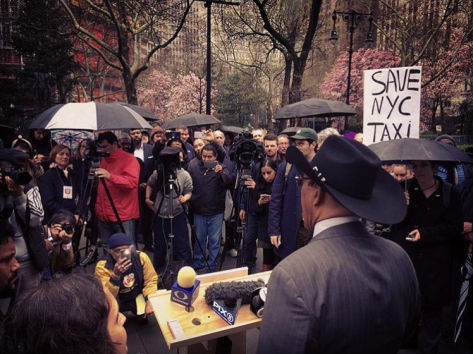 Rally’s for him, and subsequent ones, reinforced the notion that something was going to be different from here on out. Drivers of all sorts of vehicles came out, many in opposition to each other, to stand up for their job while at the same time, pressuring the city to tackle the runaway growth of the TNC’s. This brought up a massive conflict of interest issue, as yellow drivers (such as myself) claimed that the medallion taxis were granted an exclusive right to pick up street hails and therefore, needed the TNC’s curtailed and brought up to yellow standards. Fares needed to be leveled across the board, licensing and background checks had to also be made level, and the number of FHV’s (for hire vehicles) needed to be capped at a level that would guarantee enough income for all of those who drove. Drivers of Uber, Lyft, and other companies of the sort wanted their livelihoods kept, even as those services continued to add drivers ad infinitum. The numbers were quite startling with some claiming that there could be up to 100,000 FHV’s on the city’s streets by next year, with still no end in sight to the stratospheric growth. Clearly, something had to be done to stem this runaway expansion.

The first of what was expected to be a series of meetings took place at City Hall on April 30th. Led by Rev. (and city councilman) Ruben Diaz of the Bronx, proposed legislation was put forth that would address many of these issues head-on. Various drivers, former drivers, advocacy groups, and unions testified about the changes they had seen and offered various solutions to the problem. The only point that they could agree on was that there were too many cars on the street, but as to what their limit should be still remained up in the air.

Drivers testifying to the city council – 4/30

Yours truly went to the rally on the 25th and the meeting less than a week later. The former was the first time I had ever set foot in City Hall Park and the latter was the first time that I had ever set foot inside of the building itself. Not having a representative on the council (I live in New Jersey) has made it tough to get my voice heard at times but thankfully, there have been a few people in government on our side and plenty of people in the yellow cab industry who have tirelessly work in order to save what’s left of our profession. It has been heartwarming to see constructive steps being taken although many of these issues have been at the forefront for a number of years now. That it took a series of medallion foreclosures, the loss of income on the part of yellow drivers, and a series of suicides to see action on the part of the city council was nothing short of disheartening at best and evidence of a lack of effectiveness on the part of the TLC and New York City government itself, at worst.

Over the coming months, I hope to get this site back up and running again. Much of what I loved about this job has faded away in the 6 1/2 years that I’ve been doing it; nearly in proportion to the income I take home nightly. Many have asked me whether I still love this job and my response is always the same:

While I’m ready for whatever vocation lies ahead of me in life, I will keep driving during the overnight hours for as long as I have to, until that last shift finally comes. In spite of the struggles that myself, and everyone else, has faced in this industry, I still believe that it’s not too late to save it from implosion, although our time is rapidly running out.

At this point, the city owes it to all of us who put our heart, soul, blood, sweat, tears, and hours in to get it right this time around.

One thought on “New Order”