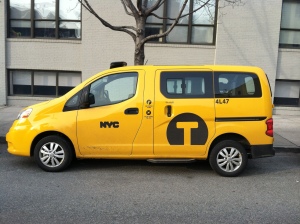 Finally, the Taxi of Tomorrow is my ride tonight – Long Island City

“Oh gosh, where’s that button? Sorry about that, this is my first time driving this.”

“This is your first day on the job?”

It was not the best of times in New York over the last few weeks. Winter refused to fully make its exit, even though the vernal equinox had come and gone in a flash. WABC news anchor and reporter Lisa Colagrassi suffered a brain aneurysm and died a day later from it after coming back from an assignment in Woodhaven, the demolition of the former 5 Pointz site was finally completed after a long post-whitewashing hiatus, and a large explosion and subsequent fire in the East Village ground much of the neighborhood to a halt as questions arose about the nature of utility work and Gotham’s crumbling infrastructure. Even the subway fare went up again last week, as the two year hikes implemented by the MTA took effect. It was with this backdrop that a bit of good news finally came my way.

After 650+ shifts over the last 3 1/2 years, the first one behind the wheel of the much-heralded “Taxi of Tomorrow” finally took place last Monday. I didn’t ask for it at my garage and when  the key and my license were pushed through the slot from my dispatcher, I knew that in all likelihood that it would be the last time I’d drive a new vehicle as a hack driver in the Big Apple. It was only recently that the ruling was handed down that the Nissan NV200 would indeed become the exclusive model of yellow cab starting next month, finally bringing the winner of former Mayor Bloomberg’s plan and ensuing competition into fruition.

I get asked all the time if the vehicle that I’m driving during a particular night was given to me or if I had a choice when I showed up to work. Most often, it’s the former although any good dispatcher will know what preferences a driver has when his or her license is handed over upon walking through the door of the waiting room. When I first started, I loved the Crown Victoria because it was the dominant model of Taxi at the time and they ran like charms. It was only when other options became more prevalent that I preferred them instead, along with their better fuel economy.

In that span, I drove the Crown Vic, the Toyota Highlander, the Toyota Camry, the Ford SUV, both models of the Ford Transit Connect, and the Toyota Van. The only difficultly was having to adjust to the controls being in a different place, and where the blind spots were. Some drivers thought that certain models were cramped, broke down too much, or had their sentimental favorites but in my case, I just wanted to get out onto the street and start taking fares. What changed more than anything else was not just the standardization of the ride, but the relationship between the drivers and the garages themselves.

Last summer, my garage was giving a discount for those who had come into work in the form of a smaller lease fee. Think of it as a rental – the lower it is, the more likely someone is likely to pay it to use the space or in this case, vehicle. As of last week, the lease fees where I work out of were dropped on Sunday through Wednesday in the non-summer months for the first time ever. No one ever gets sent home anymore (it used to happen all the time on weekends) and there’s even incentives to get drivers to bring in others who are new to the game. As one fellow hack put it the other morning, “They treated us like crap for so long and now they’re paying for it.”

It’s no secret that this is all because of Uber. In an economy that has ZipCar, Tinder, and Angie’s List revolutionizing how we travel, date, and hire contractors, Uber is redefining what it means to get from A to B on a whim wherever, whenever. Reports estimate that where are more Uber cars than yellow cabs on the streets of New York during a typical day and soon, it won’t even be in doubt which service is more numerous in major U.S. cities. The “million dollar babies” are no longer that expensive either as the price of a medallion has fallen by over 20% in the last two years. As I’ve said to those that ask, the only way that affects me is if I can’t get a reliable vehicle to drive for 12 hours at a time and whether my take justifies the effort that I put in on a particular night. So far, both of those are still working out in my favor.

I have no idea if the new Taxi will still be reliable after taking a pounding on the city’s streets for the 5 years that they’ll be in service for. Every new model was great to drive when it was clean and still had that new car smell but the Ford Transit Connect turned out to be the poster child for how *not* to adapt a van for the purpose of short hauls on bumpy streets. The door sensor went off too much, the blind spots were in odd places, and the suspension was a total failure as I had numerous complaints about my driving and inability to avoid bumps and potholes. The new Nissan was tested quite extensively as I saw a few gallivanting around empty during their test phase every so often before they were put into service but now that there are several hundred heading out every night, the real test results by means of passenger feedback have yet to fully come in.

The ride in them was fine for this driver, however. Clean, quiet, roomy, and easy to maneuver, it ran well and didn’t cost me a ton to fill up at the end of the night. My only complaint with it was that there was no way to open up the partition, as the clear divider was firmly bolted into place and didn’t have any opening that I could slide back and forth. I never had to turn the intercom on however (since I have a distinctly low and somewhat annoying voice) but given the historic drop in crime in New York over the last 20 or 30 years, was it really necessary to have this as a feature? The skylight and USB ports were a nice touch but it’s the 21st Century and with tourism booming, why not have us get as close to our passengers as possible, with the option to close the window as needed?

Even though the Camry is still my favorite model of Taxi to drive, I don’t have a problem when I’m given a Nissan during a particular shift, however. My last fare the first night I had the NV200 decided to bail out on me up in the Bronx at 4:45 in the morning, figuring that I wouldn’t dare follow him and run the risk of being the next crime statistic. As pissed as I was, I took solace in the fact that I I had my life intact and made it through my first shift in the “Taxi of Tomorrow” as if I drove it every day since I began the job. Whether that’s my ease of adjusting or result of the overall design and functionality of the vehicle is up for debate but with so many other issues facing the city and my industry, it was comforting to know that the new ride that were imposed upon us was not something that I’d ever have to worry about again.