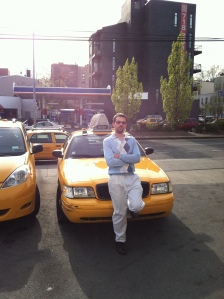 Dressed to the nines

As many New Yorkers were well aware of, the Metropolitan Museum’s annual gala was held this past Monday. Of course, yours truly worked that night, as has been the case nearly every Monday night for the last year and three-quarters. Given how slow New York tends to be on the first workday of the week, it was a notable event for me since one of my fares needed to get up Madison Ave. at 6:30 that night. Sure enough, I never got my passenger to her destination as the combination of black cars, taxis, buses, and flashing lights combined to bring the thoroughfare to a halt. The person I had in my cab understood the circumstances, asked me to turn down 72 St, and quietly paid her fare.

Once that ended, I was on with my night. It ran like any other Monday with the exception of my way back down 5 Ave. after dropping off a few fares off in the 90’s off of Park. I didn’t know what to expect since I did not work that night of last year’s gala and I wasn’t sure how many black cars would be idling in the street.

Of course, that turned out to be an insanely high number.

Readers of this blog already know of my disdain for the for-higher-vehicles that match the color of night and tend to fly like it as well. Yes, they have an important role in the transportation economy of the City, as any corporate hotshot or celeb will tell you but for the rest of us, they can be hell on wheels. Rarely do I see one get pulled over for a driving infraction or an illegal street hail and even more rare than that will be a ticket issued to one for idling in the street too long and double-parking. There was lots of both of those as I snaked my way downtown and made my way past New York’s premiere social event of the year.

Given how nightlife and society have changed over the years, the Met Gala is arguably the last annual event that draws a red-carpet ambiance to the Big Apple. Awards shows and ceremonies like the Tony’s draw a niche crowd while larger events like the Grammy’s rotate between venues every year. Film premieres will showcase those starring in them as well as other flash-in-the-pan types that are hot at the moment and none of the ones that I drive past or read about in the paper seem to have the pizazz of those during the heyday of the Hollywood Studio system. What we’re left with is a museum hosting the only event left of its kind in New York, but even that has changed over the years.

As the above link succinctly states, the event was originally known as the Metropolitan Museum Fashion Ball. Yes, that’s right – fashion. Not shamu’s begging to attend and showing up in couch retreads, but an actual event attended by society’s elite in gowns that were part of the Museum collection. Patrons were rewarded for their financial generosity and the list of attendees read like a Who’s Who of elite in New York. Most of them were not known by the general public and the event had the appearance of debutante balls and “coming out” events that helped to characterize the gilded age.

And then Anna Wintour entered the picture.

What fun would it be to have the largely-unknown constituents of the upper crust attend the event each year when celebrities that people could identify with more would be a bigger draw and hence, make the event more newsworthy? Just as she changed who appeared on a coveted magazine cover each month, she used her sway to determine who would get one of the exclusive invites each year. Not since Studio 54’s short but brilliant reign as the center of Gotham’s nightlife were socialites, models, designers, singers, dancers, actresses, the affluent, and just plain popular able to come together in one place at one time. I couldn’t help but notice the similarities between the two as I saw throngs of those wearing Halston and Diane Von Furstenberg screaming to get into Rubell’s and Schrager’s haven of hedonism on youtube videos, just as throngs of spectators stood behind metal barricades on Monday night. Some twisted part of me wishes they were rooting me on as I made my way down what is still regarded as New York’s most glamorous avenue, but reality sunk in as yet another vehicle stopped in front of me and threw its flashers on. Those who were waiting for hours outside for a glimpse of those who could care less about them would never see the folly of their ways.

One could also make the argument that those they were screaming for were also fools in their own right, as the cost of admittance to the invitation only event was rumored to begin at $5,000. While the cost of admittance was never cheap, it was originally borne by those who had a stake in the Museum and the exhibits that were shown there. The theme of this year’s event was “Punk: Chaos to Culture” , which was perfectly fitting given that the embrace of the grungy, industrial chic that punk espoused has come full circle nearly 30 years after it’s original heyday. Those who actually dressed up in punk outifts for the gala probably weren’t alive in the late 70’s and early 80’s. just as they’re unlikely to visit the museum and see the accompanying exhibit that ties in to the event. That’s not an issue since it’s prestige and fundraising that came first and not the chance to renew ties with those responsible for the exhibits that are curated there.

A few of the yellows that were in crawling in line with me picked up passengers leaving the event but it was a big o-for for me. About 10 blocks down, I picked up someone nicely dressed who was loosely tied to the night’s festivities:

Once she was off the phone, I chimed in as appropriately as I could:

“I bet you had something to do with that soiree back at the Met.”

“Yeah (laughing), I did. I work for one of the hotels near there and it’s been crazy today. I had to make sure that everything went off without a hitch for J. Lo. Tomorrow begins the real work as I have to write all the press releases for those staying at our hotel. The work never ends…”

Maybe their life isn’t so different from mine, after all.