Waiting for the first domino to fall – Madison Ave.

“Traffic lights restrain your freedom to cross a street whenever you wish.”

When I was little, I used to be like all the other kids in the suburbs and play games – real games that didn’t involve a Wii console and a connection to my friends in other houses. Much has been written about the demise of outdoor play and surely I miss those innocent days when a backyard and a set of imaginations were all that was needed in order to have some fun and quality time spent with friends. Among the games I miss were Red Rover, Hide and Go Seek, and simple tag .None of them involved hundreds of dollars of prep or waiting on line overnight at the local big box store for the latest edition to be released and when one round was over, another could begin without any hard feelings of serious implications of cheating.

All of those games involved people chasing, evading, or finding one another…which could loosely translate to what I currently do for my job. Even Frogger (which to be fair, was a video game), runs through my mind ever since I’ve had to cross a street in New York City. Anyone who’s ever seen the classic Seinfeld episode will be reminded of George’s effort to dodge traffic at the end, and how seemingly random gameplays end up translating to real life years after one first plays them.

Nowhere was this more true for me than when it came to Red Light/Green Light.

For those of you that never attempted it, the premise was simple. One person would stand facing the wall and yell “Green Light”. All the other kids would start out on a line and run towards the end of the room or playing area. When the caller yelled out “Red Light”, all the runners had to stop by the time the caller turned around and looked. If you were moving, you had to go back a certain number of steps or even to the starting line. First person to cross the end during a “green light” phase became the next caller, and so it went.

Needless to say, I wasn’t very good at it. Oh sure, I could run but when “red light” was called out, I stumbled. Stopping on a dime was never my forte and if I held back, someone would inevitably beat me and take the turn as the next caller. For the record, I did win once in a while…but that was my first realization that even blind squirrels find their nuts every now and again.

Flash forward 20 years and change and now, I get to play those games every day during work. Red Rover and Frogger when I have to maneuver across an Avenue to reach a crosstown street, Hide and Go Seek when I wish to evade the N.Y.P.D., and Red Light/Green light during the day, and evening, and night, and…always.

Objectivists who have read Ayn Ran will cringe at Elsworth Toohey’s above quote since it’s the epitome of his philosophy of selflessness. Much as the TLC is needed to regulate the industry, traffic lights are needed in order to provide sense and order to the chaos that characterizes the city streets. For many years, I was a pedestrian when it came to navigating the city and never gave much thought as to the rhythm and cadence that the tricolored machines imposed on surface travelers but once I took the wheel last summer, all of that changed as fast as a red to green phase.

Most of my fellow drivers probably don’t give much thought to how the lights in New York work but people like me that can’t shut their overactive brains off are always pondering the complexities of life and how to tie seemingly disparate threads together in ways that others can’t visualize. Like some odd form of string theory, what goes on in Midtown can affect the flow of vehicles scores of blocks away.

Don’t believe me? Here’s how.

On the major north-south avenues, each light has a red and a green phase. If a light going uptown turns green, the next one will turn green six seconds later. That’s 10 lights in a minute if you’re taking someone to Harlem from the Lower East Side and since 20 blocks north-south equals one mile, the flow of traffic will be regulated, at 30 miles per hour. Seems like some easy piece of social engineering, right?

After a few weeks of driving, I noticed that loads of lights in the mid-30’s bucked this trend. Big time. There are tunnels on either end of those streets and so the green phases on the avenues crossing those streets was shortened in order to allow for crosstown traffic to flow easier. Diagonal streets like Broadway will also cause havoc when intersecting with two other arteries, as is the case right in front of Lincoln Center. The result? A three-phase intersection that has to accommodate everyone but ends up pleasing no one. This is another reason why I *never* take 81 St coming out of the Central Park Transverse that leads onto it. You could write a book in the time it takes to wait for the light at Columbus Ave. to change, not that I ever entertained the thought. Still following?

I hope so, since neither of these don’t account for the human element.

Somewhere in a city government building, someone (or someones), has the power to change the lights. Actually, it’s a computer that can adjust to stoppages in traffic to let it by adjusting the phases of a light. Two-way section of Third Ave. moving too slow at rush hour? Theaters letting out all at once on matinee night? Rangers game went into double overtime? No sweat. The adjustments will have been made accordingly. Some of my worse nights have been where a street was moving well one hour and an hour later, it was jammed. The effort to stay ahead of the changes failed once a rainstorm started or an event let out too late and for all the tweaks to the traffic control devices and extra police deployed to the streets, the result is always the same:

You’ll end up at a red light at some point.

When I was 5, I had my tonsils taken out and spent a few days in the Hospital. I was scared to death at the time and looking back on it years later, I realized that it was one of the last times I ever saw my parents together and happy to be around each other. One of the toys I ended up playing with while I was recovering was a miniature cityscape with streets on it that had traffic lights on every corner. A magnet placed underneath the toy could change them from red to green, simply by rotating it. I loved being able to control the streets at will and make the cars move to their destinations in an orderly fashion, along with creating the occasional “accident”.

Today, I have my own car to control but that’s where the similarities end. On a number of occasions, I’ve had the experience of giving the gentility of the Upper East Side a ride home:

“Sure thing, all of the lights move well up 3 Ave. so we should zip there once we’re past the bridge.”

“That’s nice, but I prefer Park Ave. It’s a much more scenic ride.”

Oh well…at least I’ll have much to ponder at the red lights that I’ll hit every 8 blocks. 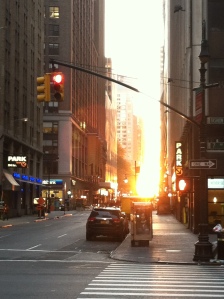